The health effects of alcohol abuse on the body are damaging. It seems strange that alcohol is such a widely used and accepted substance in our society, because alcohol is in fact, a POISON.

Your body can only process one unit of alcohol every hour. Therefore, if you drink a lot in a short space of time, the amount of alcohol in the blood can stop the body from working properly. It can:

These are indeed adverse health effects of alcohol abuse for just ONE night’s worth of excessive drinking! i.e binge drinking. 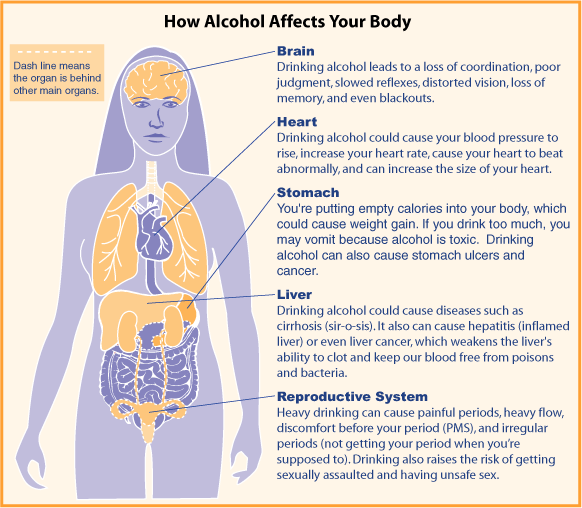 Drinking large quantities of alcohol for many years will take its toll on many of the body’s organs and may cause organ damage. As shown above, organs known to be damaged by long-term alcohol misuse include the brain and nervous system, heart, liver and pancreas.

Heavy drinking can also increase your blood pressure and blood cholesterol levels, both of which are major risk factors for heart attacks and strokes.

Long-term alcohol misuse can weaken your immune system, making you prone to serious infections. It can also weaken your bones, causing a greater risk of fractures.

Alcohol has also been scientifically proven to cause at least 7 cancers in the body as highlighted below: The pancreas is an important organ because it produces digestive juices which your intestines use to break down food, and hormones that are involved in digestion (such as insulin) which regulate blood sugar levels. Pancreatitis occurs when the cells of the pancreas become damaged which can cause abdominal pain, nausea, vomiting and fever.

Chronic pancreatitis is when the inflammation of the pancreas causes permanent damage, causing it to stop working properly. This can lead to:

The liver is our largest internal organ and it has over 500 different roles, including the breakdown of food into energy and helping the body get rid of waste products and fight infections, particularly in the bowel. Unfortunately, when your liver is damaged, you generally won’t know about it until things get serious.

How does alcohol abuse impact the liver?

Liver disease is the term used to describe damage to the liver. ‘Alcoholic liver disease’ is caused by:

This is when the liver turns glucose into fat, which it sends around the body to store for use when we need it. Alcohol affects the way the liver handles fat so your liver cells get stuffed full of it, causing an enlarged fatty liver.

If this happens, you may feel a vague discomfort in your abdomen because your liver is swollen. You might also feel sick and lose your appetite.

Simply put, you're likely to develop a "fatty liver" within 2-3 weeks, by drinking more than eight units a day (four pints of 4% lager) if you’re a man, and over five units a day (a couple of 175ml glasses of wine) if you’re a woman.

At this early stage of liver disease, the liver can still repair itself. The person may not experience any symptoms. People can spend 20 years damaging their liver and not feel any of the effects this is doing to them, although some may have intermittent abdominal pains, fatigue, nausea, vomiting or diarrhoea.

When liver cirrhosis develops, i.e when the liver becomes shrunken, the liver can no more repair itself hence it's irreversible. Stopping alcohol is very crucial now as this condition often gets worse as the liver becomes incapable of performing its functions thereby causing decompensation (liver failure). The person would then develop the following symptoms:

The risk of death from liver failure is very high as the liver stops working completely. Waste chemicals (toxins) which are normally cleared from our body by the liver fails to clear when liver cirrhosis or liver failure occurs and can pass into the brain to cause brain damage. This brain damage which manifests as confusion and unconsciousness is called hepatic encephalopathy. Liver cirrhosis also increases the risk of liver cancer.

Alcohol can have a toxic effect on nerve tissue and people who abuse alcohol may feel pins and needles or burning and tingling sensations in their hands and feet. These may persist and may last from a few months to a few years. Unless the alcohol abuse is stopped, this damage may be permanent.

Alcoholics who suffer from peripheral neuropathy may experience muscle weakness and sharp pains which, along with the loss of coordination caused by damage to the brain can lead to walking difficulties.

As you can see, the impact of even slightly excessive alcohol use over a long period of time is massively damaging to the body. If you know someone who is drinking too much or is suffering from any of the symptoms or conditions above, it is imperative that you seek medical advice as soon as possible and abstinence from alcohol is strongly recommended.

Call us now at REHAB HC so we can advise you as to what treatment options are available for you. WE ARE EAGERLY WAITING FOR YOUR CALL!.