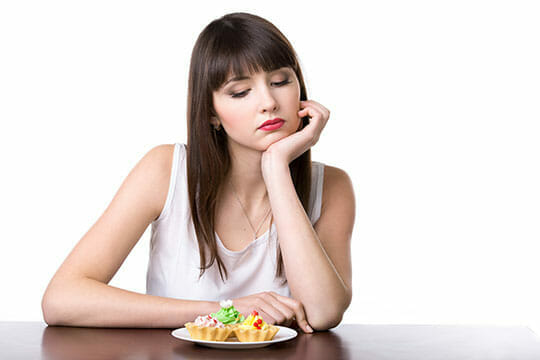 What are Eating Disorders?

Eating Disorders are serious mental conditions closely linked to other addictive behaviours. It affects over 700,000 people in the UK. The physical, psychological and social impact on the sufferers of eating disorders can be devastating. In fact, eating disorders kill more people than any other psychiatric illness. One in five of those with eating disorders will die prematurely from the physical consequences or in many cases, suicide.

The main Eating Disorders are Anorexia, Bulimia and Binge-Eating and are often ‘hidden’ addictions. The good news is that though they can be very serious, they are treatable. Like any addiction, it is important to seek treatment as early as possible. Evidence suggests that the earlier people seek help for eating disorders, the more the likelihood of full long-term recovery.

There different types of eating disorders relate to particular behavioural problems. Like other addictions, by just stopping the behaviour without the correct professional treatment, people with eating disorders may ‘cross-addict’ to another type of mal-adaptive behaviour relating to their food intake.

Anorexia – When people deliberately use methods to keep their body weight down, often to dangerous levels. Behaviours such as excessive dieting, not eating at all, vomiting after eating, using laxatives and excessive exercise.

Binge Eating Disorder (BED) – This is when a person regularly over-eats in a short space of time, often when they are not even hungry. Binge eaters often eat to the point where they feel uncomfortably full, eat alone through embarrassment, then subsequently have feelings of disgust and shame after such an episode.

These addictive behaviours are caused by an underlying problem and just like any other addiction, are often linked to emotional trauma, bullying, low self-esteem and low confidence.

As many people with an eating disorder keep it hidden because they feel ashamed of their behaviour, much like any other addiction, it can often be very difficult to spot whether someone has an eating disorder. Here are some common signs to look out for:

Do I have an Eating Disorder?

Doctor’s will often question people about their relationship with food and relevant eating history. They also use a questionnaire consisting of the following 5 questions. If you answer ‘Yes’ to any of these questions you may have an eating disorder:

What treatment is available for Eating Disorders?

Eating disorders are so complex that they usually require highly specialised treatment comprising many different elements.

Eating disorders are often caused by emotional trauma and issues from childhood and adolescence. They are exacerbated by the continuous negative thoughts and feelings that build up after every episode.

For this reason, professional counselling must always form a part of a treatment plan. Psychodynamic therapy, interpersonal psychotherapy and Cognitive Behavioural Therapy are all proven methods which help people with an eating disorder to relate their life experiences to current thoughts, feelings, relationships and behaviour. A treatment plan for an eating disorder should also include dietary/nutritional advice, self-help groups and for many, online forums. There are few options available in the community on the NHS.

Residential rehab clinics specialise in addiction and use similar methods to treat an eating disorder as they would any other addiction. The advantage of doing treatment in a residential setting is that they will have staff members to support you 24 hours a day. They will also be able to observe what and the amount you eat, keep a food diary and keep an eye on your bingeing and purging patterns if this is part of your eating disorder. Residential rehabilitation clinics will also be able to rely on the resources of doctors, Psychiatrists and Nurses and may be able to prescribe you medication as this is also recommended for some people with an eating disorder.

What do I do now?

Rehab Healthcare (Rehab Hc) can help you find a rehab that will be able to provide this specific help around your eating disorder, as well as develop with you a tailored treatment plan including ongoing aftercare and social support so that you can maintain your recovery from your eating addiction. Rehab Healthcare employs counsellors that are on call 24 hours a day to support you.